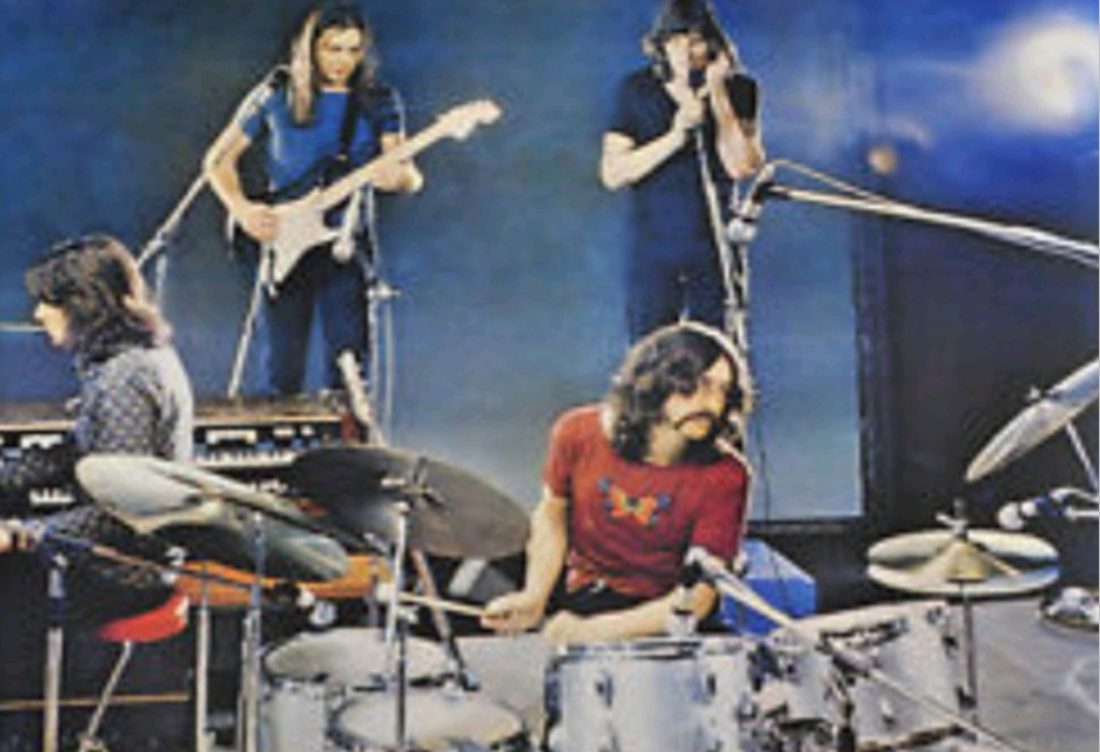 Roger Waters himself once said that one his favourite of all Pink Floyd sound effects was the rushing wind at the beginning of One Of These Days, the opening track on Meddle.

Bob was one of the founders of Storm Warning. He, Derek and Ian had long talked about forming a blues-based project together and when they met drummer Roger Willis they knew they had a band. I joined as singer and harmonica player after a few months.
We made two albums together, Breaking Out and Something Real, and we toured the UK and Europe. Always, the focus was on writing our own material and Bob was a boundless source of inventive ideas. He pushed us to experiment with time and to test the standard blues format to the limits. His inspiration came not from the usual blues rock template but from jazz, progressive rock and a vast range of other sources.
Most who heard him play could spot the David Gilmour influence, not because he sounded like Gilmour but because he brought the same disciplined emotion to his playing. It was all about the feel and the clarity and the tone. Jan Akkerman was there, John McLaughlin (again, feel, not speed for speed’s sake) and even Ed Wynne and his space-rocking Ozric Tentacles.
The thing was, for Bob it was all about the sound. We used to rag him about his array of pedals, but they weren’t there for show. He danced across them with a sureness that made every shift in tone or space count. He knew the sound he wanted and he worked tirelessly to find it. I wonder if he ever did?
Roger and I had left by the time the Strategy album was made, with Russ now on drums and Bob’s long-time songwriting partner and friend Steve Norchi writing and singing the lyrics. It’s a fine showcase for Bob’s writing and playing (I still love singing Lonely Guy), as well as featuring one of his distinctive Stratocasters on the front. That’s another thing, why did he always play weird guitars?
Working as The Storms, the band made Funky Basement Blues with American sax man and singer Eddie ‘Blue’ Lester, which was always a favourite of Bob’s. And then I came back and we made Take Cover, our selection of covers that ranged from Jimi’s Stone Free to a disco version of Jack O’Diamonds.
As anyone who has seen Storm Warning in the last year or so will know, our fabled fifth album is in the can and awaiting a few final tweaks from our masterful co-producer and good friend Martin Atkinson. I think we’d done enough for Bob to know we’d done a good a job. I’m glad we got the chance to showcase some of the new material and for Bob to know that it was getting great responses.
We made a conscious decision not to tie ourselves to blues this time and the album is much broader in its scope. It gave Bob a chance to explore his ideas more deeply and we’ve captured some wonderful examples of his majestic and distinctive sound.
Bob and I also worked together in an unplugged duo/trio format, which brought out another part of his eclectic musical vocabulary. I say unplugged; Bob was never completely unplugged and he made effortless use of banks of loopers and delay pedals to create ethereal landscapes of sound that were a joy to explore.
Recently, Bob and his wife Bella, who met when they were working with Steve Norchi’s J Fordaway, were writing together and were planning to play as a duo. It’s one of many sad dimensions to his passing that the project remains unfinished.
Bob was a loving, kind and funny man. He was meticulous and organised and ready for anything. He always had the cable you needed if you’d lost yours and he travelled with two amps and plenty of strings. I never needed to ask him for a harmonica, but I bet he had one in his kit somewhere. With the dark humour that helps us survive the hardest times, we have been wondering if he had a spare of himself in the car.
Our thoughts are with Bella and the whole family, especially Bob’s daughter Sascha and step-daughter Arwen. We’ve lost a great friend and a unique talent. It’s going to be tough. He had so much more to play.
Our second album, Something Real, drew its title from one of Bob’s songs, for which he wrote most of the lyrics as well as the music. I just adjusted them a bit to fit my singing; the sentiment was all his, though it’s one we shared. And right now it’s more precious than ever.
Give me something real
Something I can feel
I need something I can use
Oh how I need the blues
Here it is. Just listen to that guitar.

As the recording diary shows, Focus had a big influence on this album. Not because it sounds like them, but just because they reminded us what was possible. We saw them at, of all places, a blues-rock festival in Bude. We were on the bill in the afternoon and they were headlining.

Thijs van Leer and Pierre van der Linden were there from the early days and there were two new guys we didn’t know: Udo Pannekeet on bass and Menno Gootjes on guitar. I only had one Focus album, one of those brilliant Polydor Flashback compilations with the spray can title. I’d just never got round to them, I got distracted by the blues. Bob, however was a massive fan, Focus III being a formative album for him. He was utterly starstruck.

You’re always worried of course. Will it just be a shadow of what it once was, will it be the same without Akkerman, all that stuff. And of course it was soaringly brilliant, a band still in evolution, still finding new things to say but without ever losing its essential… well, Focus. We were exhausted, intimidated and inspired.

Next morning, we all agreed: let’s not try to do a blues-rock album. We’d all compromised a bit to find common ground, me being the slightly hysterical blues purist and metal fan, Russ being the punk, Bob being weird and into all kinds of odd things, Derek being an actual proper musician from when rock was rock, and Ian being utterly inscrutable. But he definitely has a touch of Rick Wright in there somewhere.

So we decided to just let it happen and out came Different Horizons. Not a blues-rock album, but bluesy and rocky and whatever else. I think you can hear the best of five individuals working as a band. Only one harmonica song and that owes more to War than to Sonny Boy. And sound effects and everything.

Not just because Focus re-engineered our consciousnesses in Bude. But it didn’t half help. And I now I have all eleven Focus albums and Focus XI is just as much a kick in the face as Moving Waves.